Gujarat to provide free food to the poor: 3 crore people will benefit, from April 1st

Gujarat to provide free food to the poor: 3 crore people will benefit, from April 1st
After the Prime Minister declared the country a lockdown for 21 days, the families who earn their living by eating daily in Gujarat are in trouble. However, an important decision has been made by Chief Minister Vijay Rupani for these families. Rupani has announced to give free food to poor families for 21 days. Which will be implemented from April 1st. Grain will be given to ration card holders from 1st April. A total of 30 million people, including the workers, the poor, the workers, will benefit.
Update Gujarat
>> Vegetable Market facility opened at Ellisbridge Riverfront Gujri Bazaar in Ahmedabad
>> CM Relief Fund opened to help poor and middle class people and deliver life necessities
>> In the main vegetable market of Bhuj, people descended on the overcrowded police road, removing strict ranks of vegetables with strict instructions.
>> Mahakali Mataji temple closed for the first time in Chaitri Navaratri in the history of Pavagadh 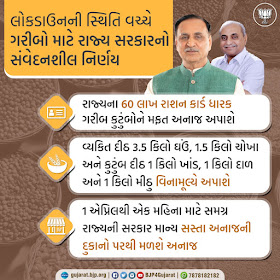 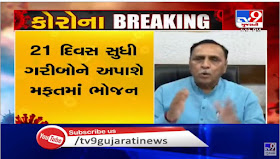 Cereals will be provided per person
For one month from 1st April, 3.50 kg wheat, 1.50 kg rice and 1 kg sugar per family, 1 kg lentils and 1 kg salt will be provided free of cost at a government-approved cheap grain shop for one month from 1st April. The Prime Minister announced that the lockdown to protect the citizens from the corona transit has been seriously planned by the Prime Minister so that such small and poor families will not face any problem in the future so that there will be no problem in the supply of life-saving goods or any other essential services. Is. 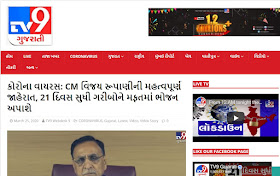 The road transport and highways ministry has written to state transport departments to treat e-copies of driving licence and vehicle registration certificates in the DigiLocker or mParivahan app as valid documents on par with the original ones. However, sometimes the traffic police or the motor vehicles department do not treat such documents as valid. This happens particularly in cases where someone has broken a traffic rule for which the documents need to be impounded by the traffic department.
IMPORTANT LINK:
READ DIVBHASKAR NEWS REPORT FROM HERE
WATCH VIDEO FROM HERE
READ ZEE NEWS FROM HERE